Is the supermarket trolley charged? It was for easy recycling.

Nowadays, many people like to go shopping in supermarkets and walk in and push a cart. Recently, some members of the public have reported that the trolleys in a large supermarket in the city centre have been locked up and they have to use a single coin to use them. Although this has reduced the phenomenon of customers randomly placing trolleys, there are also many customers who are in trouble.

In people's minds, supermarkets keep boxes, shopping baskets, trolleys and other facilities should be free, and now how do you start to collect money? On May 31st, the reporter saw that on the first and second floors of the supermarket, a device was installed on each wheelbarrow, and the customer needed to pay a coin before he could use it. 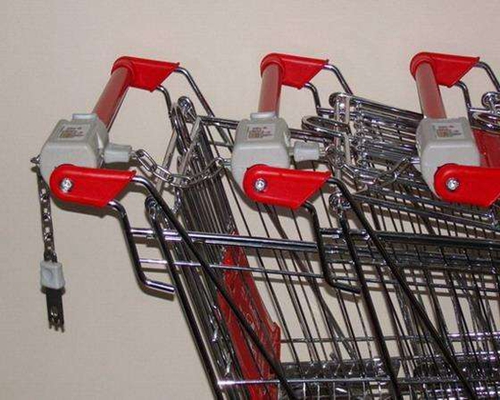 The staff member said that supermarkets promoted shopping cart with coin lock a few months before the final implementation of the new measures. This seemingly inconvenient customer initiative has actually brought convenience. As a result of investing a dollar in advance, the customer will put the wheelbarrow on the collection point after the purchase is completed to take out the coin, which means that the customer pays the deposit first, allowing the customer to develop a habit of using the trolley in a proper way, so that subsequent customers Shopping is not affected. Judging from the facts, the current efficiency of recycling trolleys has been significantly improved. "Why come to the supermarket to buy a car and you have to charge? It's too unreasonable," grumbled an old lady. "Put a coin into the coin slot at the rear end of the lock. The front lock handle will pop up to take the car. When you return the car, insert the lock handle of the previous car into the lock hole of the car and take out the coins." The staff explained to her that this was a new supermarket rule. The one coin that was put into this car was taken out when the car was returned. In fact, the trolley was used free of charge.

“This is too inconvenient!” “What to do if there are no coins.” For the new regulations for supermarkets, many customers said they did not adapt, but some customers also said, “This is a good rule to prevent the shopping cart from being thrown everywhere. Customer civilization shopping."

In many supermarkets in urban areas, such as the practice of this supermarket is still the first time. So, why does this supermarket not have to take the unusual route to launch such a coin-locked shopping trolley? Staff told reporters that in the past, many customers had problems with parked trolleys, and supermarkets had to use a lot of manpower to put supermarket trolley in right place.

During the interview, some customers also suggested that supermarkets still have to make adjustments according to the actual situation. For example, when arranging coin exchanges, when the morning with more elderly, it is appropriate to unlock some locks to provide them with convenience.